I meant to go to bed reasonably early last night, but I got caught up reading through my slides and prepping for the SHARP class I was giving and before I knew it, it was way past my intended bedtime. Whoops.

My alarm went off too early and I almost rolled over and went back to sleep, but I remembered that there was a 5K this morning and that I’d promised to meet my coworkers to run with them. Breaking a promise makes me feel terrible for days and sometimes weeks, so I sighed and got up. I checked the temperature and it was chilly and breezy. We had some small cold front come through that dropped the temperature. I don’t like being cold so I wore my Oiselle bolt tights, a t-shirt, and a hoodie and went to meet my coworkers.

It’s proven that you run faster in bolt tights. Also, lots of people will admire them.

One decided to sleep in so the other and I walked over to the USO where we got our running shirts and drank a cup of coffee while watching whatever movie was playing on the TV at the time (The Last Witch Hunter, which has a truly underwhelming 16% on Rotten Tomatoes).

I foolishly decided to wear my t-shirt over my hoodie and run like that and noticed as we waited around for the start that I wasn’t even a little cold. I don’t like being cold, but I know even if I’m cold that I’ll warm up over the course of a run. I thought about ditching the sweatshirt, but I figured I could tough it out for a 5K.

Waiting for the start

It was a nice day and I went out pretty slow but picked it up for negative splits the whole way. At the turnaround point I counted the women ahead of me and I was fourth, but they were fading while I was picking up speed. I lost some time at the turnaround because the guy next to me didn’t understand that he needed to turn and got confused and just stopped inside of my track, which slowed me down a bit. As we headed back I first ran after the third girl, who looked strong but looked like she was running with the person next to her, so I managed to pass her. The second girl was fading quickly and I pulled up to and away from her.

I was overheating at this point and regretted wearing too many layers, but I was almost done so I held onto my pace. I never caught the first place woman; I remembered her from the marathon last weekend and she was in the top five women there too. The course was a little long at 3.22 miles because of the added turn, but my GPS had my 5K time as 24:48, which is pretty decent for me and I finished as second female overall (out of a very small field). 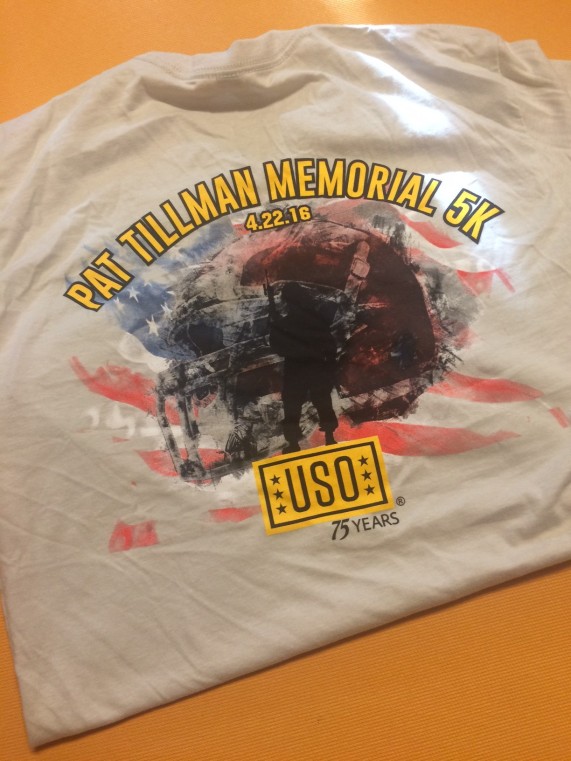 The back of our t-shirt commemorating Pat Tillman’s bravery and sacrifice. I don’t know many who would feel the call and walk away from a successful football career or a 3.5 million dollar contract.

I waited around for my coworker to finish and cheered on the other finishers before heading back. I’m trying to do more yoga in general and especially after a run so I pulled out my yoga mat and spent some time going through some poses. I really felt a lot better afterwards, not only looser but also more relaxed and awake.

Although getting up early is never my first choice, I had fun and it’s always more meaningful to me to remember our fallen and how fortunate I am to be alive and be able to run.